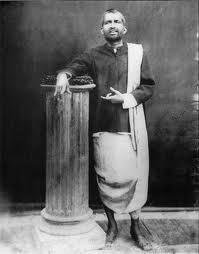 Sri. Ramakrishna is Avatara Varishta – the greatest of all Divine Avatars. He is the embodiment of the great Divine in its pure sattvik form. His life displays the fulfilment of all religions, all sadhana paths and all kinds of spiritual realizations. His sayings are the lights that guide our path of life. By taking shelter in Him and following his teachings in life, we reach God quickly and safely. He is our path and our goal. We worship Him, we meditate on Him, we adore Him, we follow Him and we reach Him finally.

He himself said many times, as reported by Sri. Mahendra Nath Gupta, the famous recorder of Gospel of Sri Ramakrishna—“Whoever meditates on me will inherit my wealth as a son inherits his father’s wealth. My wealth is Bhakti, Jnana, Prema and Samadhi”.

By meditating on Him, we want to inherit His wealth in this very life. Sri. Sarada Devi is the embodiment of universal motherhood of God. She lived the life of a true mother of all, men, women, animals, insects, saints and sinners, angels and demons, all alike.
We worship Her as our true mother and take shelter at Her feet in all activities of our lives. He is the chosen Son of Lord Sri Ramakrishna who spread the ancient religion of India—the Sanatana Dharma — all around the world. He is the embodiment of all the Rishis and seers of ancient India.
We bow to him, we worship him, we also worship all his brother disciples, who were the chosen children of Lord Sri Ramakrishna and pray to them to lead us on the spiritual path. Swami Tapasyananda was a senior monk of the Ramakrishna Mission. He was a disciple of Swami Shivananda, one of the eminent disciples of Sri Ramakrishna. The Swami was a vice-president of the Ramakrishna Order from 1985-1991. He was an erudite scholar in Indian and Western philosophy. He has to his credit many books in English, including the translations of many scriptures. His translation of Bhagavata Purana in four volumes has been highly acclaimed in intellectual and devotional circles. He was the president of Ramakrishna Math, Chennai from 1971-1991. Swamiji was well known for his austere life and intuitive intellect. He was a prolific writer. He translated a lot of Hindu classics into English from original Sanskrit. Swami Nandananda
He was the disciple of Swami Vijnanananda who himself was a direct disciple of Lord Sri Ramakrishna. He treated our Guruji as his grandson and taught many secrets of sadhana during intimate talks with him. Our Guruji met him as a lad of 12 years and consider him as one of his gurus. Swami Gambhirananda
Swami Gambhirananda (1889-1988), born as Jatindranath Datta, was a Hindu sanyasi associated with Ramakrishna Mission. He was born at Sadhuhati in today’s Bangladesh. A graduate of Scottish Church College in Kolkata. Jatindranath Datta was influenced by his teacher Swami Jagadananda. He joined the Ramakrishna Mission in 1923. He was initiated to sanyas by Swami Shivananda. A scholar, he was the 11th President of the Ramakrishna Mission. He is guru to our Guruji. Guruji took initiation from him in 1988 at Hyderabad. He is the disciple of Swami Sivananda who himself was a direct disciple of Lord Sri Ramakrishna.